Vijay Eswaran, a respected motivational speaker, lecturer and the co- founder and the executive chairman of the QI group, met for the first time with professor Muhammad Yunus, a... 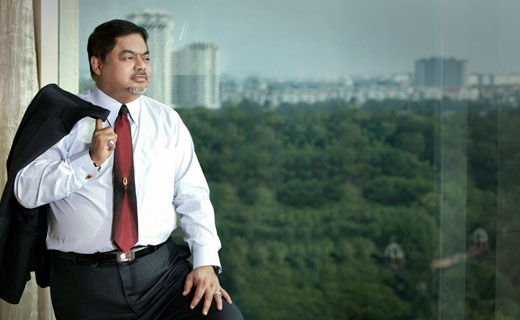 Vijay Eswaran, a respected motivational speaker, lecturer and the co- founder and the executive chairman of the QI group, met for the first time with professor Muhammad Yunus, a Nobel laureate on 22nd of February in Singapore. Both Vijay Eswaran and professors Muhammad Yunus are renowned philanthropist who are fully committed to change the world for the better. We can all guess the talk that the two like-minded and passionate leaders had when they met on that particular day.

The 3 day trip of professor Yunus in Singapore was very busy. First, the moment he landed in the city, he went straight to lecture at the Social Business Forum that was organized by the National University of Singapore. He also attended business lunches, high level meetings and interviews with many organizations. However, despite the busy schedule that he had, he also took his time to hold a special meeting with renowned philanthropist Vijay Eswaran.

The meeting that the two world leaders had was very successful and one thing that the two leaders agreed is that change and development that people crave for actually lies in the hands of the youths. Through his non-governmental charitable organization QNet, Vijay Eswaran has empowered millions of youths across the world, a factor that has enabled them to take full control of their lives and careers. Professor Yunus also believes that the future lies in the hands of young people and that was way he has pledge to reach out to as many youths as possible to motivate and inspire them so that they can be able to make this world a better place to live.

As the executive chairman and co-founder of the QI group Vijay Eswaran established a higher learning institution, The Quest International University Perak in Malaysia that professor Yunus has taken special interest in. Professor Yunus sees this project as a special opportunity that will go a long way to help impact positively on the lives of the youths. He sees it as a place where youths self-confidence and esteem will be boosted greatly thus enabling them to take full charge of their lives and determine their own destiny. According to him, by empowering the youths with world class education, you will have given them a weapon that will help them change the world for the better.

Just like Dato Vijay, Professor Yunus is also a renowned entrepreneur and the founder of the Grameen bank, a micro leading institutions. He was impressed with the fact that Dato Vijay was able to use his influence in the business world to impact positively on humanity. Professor Yunus has also used his career to change the lives of the less fortunate by venturing into many social businesses and recognizing them fully because of the special role that they play in addressing vital issues that the society is facing. A good example can be from his organization (Grameen Sharkti) that has helped more than 225, 000 in Bangladesh in home solar system installation. This devices are not only ecofriendly but has also played a big role in creating jobs for thousands of Bangladeshi people.

The meeting that the passionate and a likeminded philanthropists had was actually a beginning a lifetime partnership. Although both individuals have achieved many things on their own, one thing that stood out after the meeting is how they can work together to bring even greater difference to the world. Upon conclusion of the meeting, it was evident that the desire and deep interest to help change the lives of the youths and the less fortunate people in the society was their first priority. Although professor Yunus had to rush to the airport to take his flight, he spared some little time to sign a special copy of his recently launched book which he gladly handed over to Dato Vijay. Dato on the other hand did not waste time to reciprocate and he handed over a copy of his book titled  “The Sphere of Silence’’ to professor Yunus. In addition to the special meeting that Dato Vijay had with profession, the event held in 22 February also presented a perfect opportunity for him to meet and form network with other renowned world leaders including Professor Wong Poh Kam, the director of NUS business school. He is also the professor of the NUS engineering school and the LYK School of public policy.  Follow Vijay on Facebook, and read more about his work here: Dato Vijay Eswaran: From taxi driver to worth over $500 million dollars

Nintendo Taps Into Key Improvements to Make Switch a Success

Overcoming the Fear to Start a Business