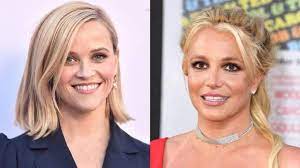 Actress Reese Witherspoon, 45, and Singer Britney Spears, 39, even though have worked in different professions all their lives, but still, both share many similarities related to their stardom. The two artists got success at the same time in their respective industries with their talents, but right from the start, the media has treated them differently.

Reese has explained how, over the years, the media has treated her as a “good” girl, but Britney was considered as a “bad” one and how she used to live and partying with Paris Hilton and Lindsay Lohan, she tells the Time magazine.

“What if the media had decided I was something else? I would be in a totally different position,” She says about her increasing popularity in Hollywood as she rose from a teen actress to a widely acclaimed and respected film star as an adult. “I want to say it’s my decisions or the career choices I made, but it felt very arbitrary. And kind of sh***y,” about the stories of Britney that the media covered. Reese showed higher regard to that.

It was 1999 when both the artists got their big break. Reese received critical acclaim for her role in the high school drama series, where she played the character of an ambitious teen Tracy Flick and as Annette in Cruel intentions, to perform the memorable character of a teen. At that time, Britney also achieved overnight success when her debut album “Baby One More Time” was released with its catchy title song and celebrated music video.

Two years later, the actress transitioned out from her roles of teens and entered into the world of comedy where she did Legally blonde. This hit movie created her image as a legitimate leading lady over the box office. The year 2001 also saw Britney’s successful effort to rock the world with her third music album that included the top hits, like “Overprotected”, “I’m a Slave 4 U”, and “Not A Girl, Not Yet A Woman.”

The similarities in the lives of both the women still continued when they got married in their early twenties. Reese got married to her fellow actor Ryan Phillippe in 1999 when she was just 23. In 2004, when Britney was 23, she got married to dancer Kevin Federline in 2004. But at that point in time, she was already the target of the media for her breakup with singer Justin Timberlake in 2002.

In his music video “Cry Me a River”, Justin indirectly accused Britney of cheating on him and leaving him. Britney also got the heat from the people who said that it was an example of her sexualized image. These types of statements from the people also included her stage show at the 2001 MTV VMAs, when she performed “I’m A Slave 4 U” in a super sexy outfit holding a snake on her shoulders.

Johnny Crawford, co-star of ‘The Rifleman’ dies at 75