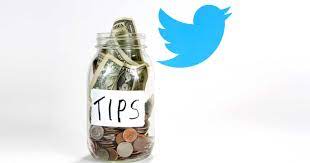 A new feature launched by Twitter lets you pay for tweets. Twitter says it’s “an easy way to support the incredible voices that make up the conversation”.

However, only a few people namely a group of creators, journalists, nonprofits can use this feature to receive money. The feature utilizes different payment platforms like Patreon, PayPal, Venmo, Cash App, and BandCamp. The company has plans to extend this feature to different groups as well in the future.

The feature is currently accessible to both Android and iOS users. Those who use Twitter in English can use the feature for now (The company plans to add languages and extend the feature). Twitter users with the mentioned features can see the icon on the left of the follow button on their profile pages. The page then opens up with various payment apps, enabling users to select one to make their payment.

Security expert Rachel Tobac highlighted the issue by testing it, ”Huge heads up on PayPal Twitter Tip Jar. If you send a person a tip using PayPal, when the receiver opens up the receipt from the tip you sent, they get your *address*. Just tested to confirm by tipping @yashar on Twitter w/ PayPal and he did in fact get my address I tipped him.” she tweeted.

After this, Twitter product lead Kayvon Beykpour appreciated her by thanking her. She also said Twitter was not responsible for how PayPal handled the details. PayPal responded by saying that the issue arose due to the “goods and services” option used by Tip Jar that enables it to share address details to ship goods. It further stated that the issue could be resolved if users use the “friends and family” option while paying to avoid unseen circumstances.

In a blog announcing the feature of Tip Jar, Twitter’s senior product manager Esther Crawford said, “We $ee you – sharing your PayPal link after your Tweet goes viral, adding your $Cashtag to your profile so people can support your work, dropping your Venmo handle on your birthday or if you just need some extra help.”

Ryan Lizza, Politico’s Washington correspondent tweeted “Seems like Twitter’s tip jar feature is going to raise some issues for newsrooms. What do people think? Should reporters at your favorite pubs and networks be allowed to accept money from anyone on the internet? Are any prominent MSM reporters using this? Is it ethical?”

Twitter to allow users to host their own Audio Space