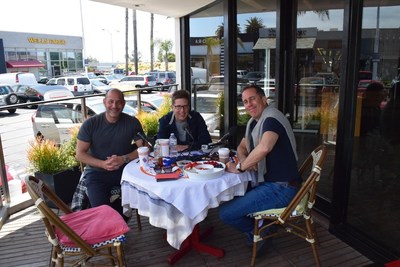 A new podcast is coming to the largest advertiser-supported podcast network in the country. I am referring to “PodcastOne,” of course, and the new podcast will be “Spike’s Car Radio” hosted by Spike Feresten. The Founder and Executive Chairman of PodcastOne Norman Pattiz made the announcement this month.

Feresten has been a comedic writer in the past and has several successes under his belt. One of them is the “Seinfeld” episode entitled “Soup Nazi.” His other claim-to-fame is his love of cars which led him to host a television show about automobiles. Fans will know this show as “Car Matchmaker.”

The new show is going to take place at the Malibu Kitchen and will be a point where celebrities who regularly frequent the restaurant will be able to talk about their cars while they enjoy a cup of coffee. The discussions are sure to make people laugh as guests regale the audience with stories about what is going on with cars today. They will also discuss the newest models and give advice to those who are searching for a new or classic vehicle.

The first show has already been recorded and is available to the public. It features Feresten’s good friend Jerry Seinfeld. You can listen to the podcast by visiting PodcastOne.com. It is also available on the Podcast app and Apple Podcasts. Feresten has some very interesting guests scheduled for future podcasts, including Dick Van Dyke, Chris Hardwick and Jeremy Piven.

Jerry Seinfeld’s interest in the show will not end with just one broadcast. He also contributed toward the development of the show’s entertaining segments, and he will continue to appear on the show. Another friend Paul Zuckerman will also pay a visit to the set to tell the many entertaining stories that he has about cars. Remember that there is always room for listeners who wish to join in on the conversations.

Feresten remarked that he has been going to Malibu Kitchen to have breakfast and pleasant conversations about cars with friends for many years. He sees his podcast as a way to bring even more people to the party. He enjoys the show immensely, and he hopes that the podcast will be a way for him to earn some money. He can’t believe that he is being paid to talk about automobiles and have breakfast at the same time.

Norman Pattiz is pleased with the way the podcast has turned out this month. The podcasts that he introduced to the public in the past were instant hits, and he asked himself how he could possibly do any better than those podcasts with Kaitlyn Bristowe and A&E’s Cold Case. It turns out that he has taken things a step farther with “Spike’s Car Radio” and Jerry Seinfeld.

Norman Pattiz founded PodcastOne and is the current Executive Chairman of the company. When asked how he came up with the idea for PodcastOne, he mentioned his meeting with Kit Gray. At that time, Kit Gray was the representative of several people who had podcasts, and he had developed a home-based business with them. Norman was instantly struck by this idea, and he thought that he could do for a digital radio station what he had done for his old radio behemoth Westwood One.

Norman founded Westwood One and was the Chairman Emeritus of this company. Under his leadership, Westwood One became the largest radio network in the industry. After leaving Westwood One and meeting Kit Gray, he went straight into what he was meant to do next, and that is to found PodcastOne.

When Pattiz launched PodcastOne in 2012, it didn’t take any time at all for it to rise to the top of “audio on-demand” programming, and he has added several big names to his roster. These include Dr. Drew, Dan Patrick, Nicole “Snooki” Polizzi, Chris Jericho, Adam Carolla, Laura Ingraham, Penn Jillette, Steve Austin, TheCHIVE, Heather Dubrow, Larry King, Shaquille O’Neal and many more.

Norman Pattiz received the honor of being appointed to the Broadcasting Board of Governors of the United States of America in the year 2000 by President Clinton. In 2002, President George Bush re-appointed Pattiz to the same position. In this capacity, Norman was able to manage the non-military broadcasts that the United States launches. He also created Arabic language television and radio services that reach 22 countries in the Middle East.

Pattiz received the well-deserved honor of being inducted into the National Radio Hall of Fame in 2009. The Library of American Broadcasting also celebrated his accomplishments that year by presenting him with the Giants of Broadcasting Award. It should not be a surprise to anyone that Pattiz received several Broadcaster of the Year Awards. He also accepted the Freedom of Speech Award and the Distinguished Education Service Award.