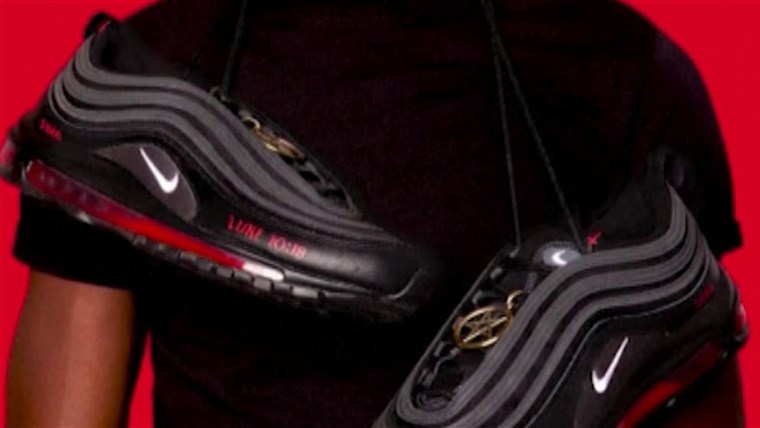 Nike has decided to take the legal route against MSCHF, a Brooklyn art collective, over the highly-talked “Satan Shoes”. The modified shoes which were sold for $1,018 per pair comes with a pentagram, an inverted cross, and a drop of human blood. The shoes also come imprinted with the words “Luke 10:18”.

Claiming trademark infringement, Nike has urged the court to prevent MSCHF from selling the modified shoes. “MSCHF and its unauthorized Satan Shoes are likely to cause confusion and dilution and create an erroneous association between MSCHF’s products and Nike,” as stated in the lawsuit. The Satan Shoes were made by modifying the Nike Air Max 97s.

In collaboration with rapper Lil Nas X, a total of 666 pairs of shoes were released by MSCHF on Monday. The entire lot got sold within a minute. The launch coincided with the launch of Montero, rapper Lil Nas X’s new song.

Nike does not authorize or approve of the customized shoes, as stated in their filing with the US District Court. “There is already evidence of significant confusion and dilution occurring in the marketplace, including calls to boycott Nike in response to the launch of MSCHF’s Satan Shoes, based on the mistaken belief that Nike has authorized or approved this product,” it further said.

The shoes also received some flak from conservatives including Kristi Noem, South Dakota Governor, on social blogging site Twitter. “Our kids are being told that this kind of product is, not only okay, it’s “exclusive.” But do you know what’s more exclusive? Their God-given eternal soul. We are in a fight for the soul of our nation. We need to fight hard. And we need to fight smart. We have to win,” read her post.

In response, Lil Nas X replied to the critics and the lawsuit by tweeting several memes on Twitter. However, the buyers of the shoes are now worried whether this whole conflict will lead to them losing their money.

“I’m hoping I’ll receive them since I paid for them,” said Joseph Rasch, who bought the shoes for $1,080. “I wanted to support a black gay man who is attempting to show a different narrative in a majority Christian country that currently is dealing with a lot of issues with black people. So what better way to do that than to buy shoes that this person has collaborated with?” he further said.

Moreover, McKenzi Norris, another buyer of the Satan Shoes, is worried that this news will hamper his plans to resell the trainers on eBay. “In general I think Nike’s lawsuit and their intervention is pretty ridiculous considering how much damage it can cause to everyday people like me who just like to customize and resell their products legally,” he said.

PayPal to allow US users to check out using Cryptocurrencies

Hashgraph Vs Blockchain: Which Is Better