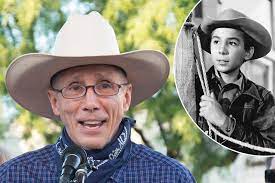 Johnny Crawford, the young star of ‘The Rifleman’, died on Thursday at the age of 75. He portrayed the memorable role of a young son of a Civil War veteran, played by Chuck Connors, in the Rifleman series from 1958 to 1963.

He also appeared in The Mickey Mouse Club’s first season and gave many hit songs that got a place in the Billboard Hot 100.

Crawford was diagnosed with Alzheimer’s disease in 2019. From then, Paul Peterson, the fan and well-wisher of the former child actor and who also played a one-time role in ‘The Donna Reed Show’, started a GoFundMe campaign to help Crawford’s family with the expenses of care and treatment.

The young star was only 12 years old when he played the role of Mark McCain in the Riflemen. In the series, he was the son of widower Lucas McCain. The Series went on for five seasons, from September 30, 1958, to April 8, 1963, but it reran on TV for many years to come. The storyline of this four-starred successful series was crafted by Sam Peckinpah and its shooting was done in various territories of New Mexico.

In an interview in 2018, Crawford gave the credit for the success of the series to its father-and-son dynamic.

“That, and the fact that there was always a lesson at the end of every episode. Really, it’s such a wholesome show — a healthy show,” he said. “And Chuck was so perfect. You know, I still miss him [he died in 1992]. He was unique — I’ll never meet anybody else like him again. He tried to be a good influence for me, even off-camera. And he treated me like an adult when we were working. He made it much easier than it might have been. He was a lot of fun.”

John Ernest Crawford, his full name, was born on March 26, 1946, in Los Angeles. His early talents were tap dancing, fencing and he also used to imitate singer Johnnie Ray. With this singing talent, he became one of the Mouseketeers in ABC’s ‘The Mickey Mouse Club’s first season in 1955-56.

Through his career in Hollywood, Crawford worked in many TV shows, among which ‘The Man in the Gray Flannel Suit’ (1956), ‘The Lone Ranger, Climax!, Matinee Theatre’, ‘The Loretta Young Show’, and ‘Courage of Black Beauty’ (1957) are famous ones. His other popular TV shows are ‘Hawaii Five-O’, ‘Little House on the Prairie’ and ‘Murder, She Wrote’.