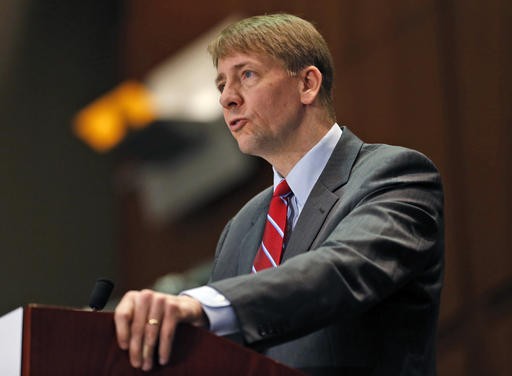 After hinting that he may resign, Richard Cordray, Director of the Consumer Financial Protection Bureau, sent a letter to President Trump stating that he is officially vacating his position.  At the same time, Cordray announced that he was appointing Leandra English, his chief of staff, as the bureau’s acting director. Trump seized the opportunity to designate Mick Mulvaney, head of the Office of Management and Budget, as the interim director of the CFPB, setting up a possible court battle.

Senator Elizabeth Warren, a passionate founder of the CFPB, is not pleased with Trump’s move. She fears that Mulvaney’s mission will be to dismantle the agency, since he once voted to kill it when he was a member of Congress. Mulvaney and other Republicans believe the agency was created unnecessarily in the chaos that surrounded the financial crisis of 2008. The initial purpose of the agency was to monitor Wall Street, but it has gained regulations and powers that many critics feel impose harsh constraints on businesses.

Cordray believes that the Dodd-Frank Act gives him complete authority to name an interim director. Trump, however, cites the Federal Vacancies Reform Act as giving him the authority to install Mulvaney in the director position. Even Administration officials concede that other laws may conflict with the Vacancies Act, but they think the President has the higher authority in this situation.

The choice of the Director will determine the future course of the CFPB. Republicans believe the Bureau has too much power and has overwhelmed lenders with needless red tape. They are particularly unhappy that Congress does not have any control over the CFPB. Under its present structure, the director has the sole power to control the policies of the Bureau; it is not a bipartisan commission and does not receive any input from Republicans.

CFPB’s legitimacy is even questionable. A Washington federal appeals court has ruled that the structure of the agency is unconstitutional. The ruling also said that the autonomy given to the director was different from other government agencies and should be restructured.

With Mulvaney in charge of the CFPB, Republicans will have the chance to roll back many of the regulations implemented under the direction of President Obama and Senator Warren. Liberals can no longer use the powers of the CFPB to introduce their version of socialism into the operations of businesses.