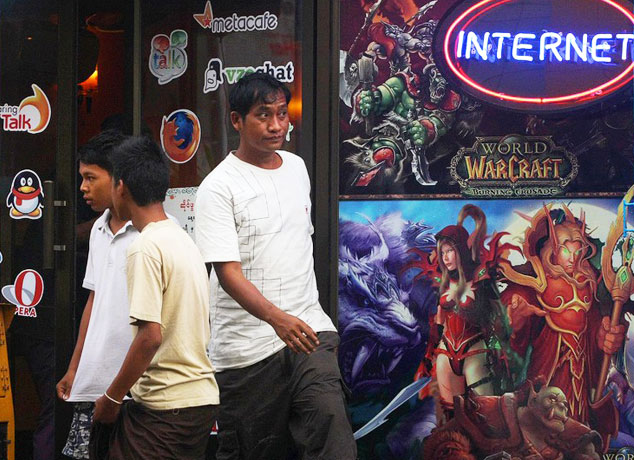 Thai-Burmese antagonism stretches far from ancient disputes, through much of today’s regional turmoil.  Though both being predominantly rural, the Internet seems to be adopted in very different ways.  Thailand’s youth, as with most of their counterparts throughout much of Southeast Asia, are quick to seize on the Internet’s connectivity and the abundant opportunities that ensue.

According to AC Nielsen, 36% of Internet users in Thailand access the web via mobile devices, with three-quarters of users are under the age of 24.  Mobile penetration rate in Thailand is almost 100%.  Statistics also reveal that Thai Internet users spend more than 50% of their time online than watching TV.  Singapore’s We Are Social reports 85% of Thai netizens visiting social media websites at least once weekly, while monthly video streaming and downloading figures at 82%.  That said, Thais are also avid gamers, with 60% of Internet users playing online games at least several times each week.

Myanmar, formerly Burma, paints a totally different picture.  The ruling Junta’s restriction and blocking of sites has made it one of the few countries where advertisers find it difficult to target and penetrate into Facebook.  However, the situation is not as bleak as it may appear, as reports suggest many who wish to gain access to the web often found ways through the country’s vast network of cybercafés.  Unconfirmed sources went further to state that as many as 80% of Burmese Internet users maintain Facebook accounts, a figure still considered small by Thai standards.

Although broadband services were small in number, one positive aspect was the progressive introduction of a variety of platforms, including more recent WiMAX services.  While Myanmar still needs to seriously address regulatory reform, there was no evidence that any real progress had been made on this front.  Meanwhile, nobody, not even the Burmese are immune to the fun of blogging.  An October 2010 survey found that blogging is the fastest growing type of Internet use in Myanmar, with 25 percent increase from 2009.  A 2009 survey found that,

Fledging infrastructure in both mobile and fixed lines may be the single cause of such lacking penetration.  Yet Myanmar may be taking the right track of development, as the country’s mobile phone infrastructure evolves with foreign involvement.  The Junta’s Ministry of Communications, Posts and Telegraphs has announced the planned extension of 30mil more GSM private phone lines in cooperation with private companies over the next 5 years.  Already in September 2011 the country’s telecommunications authority has signed an agreement with Chinese companies ZTE Corp. Ltd. and Huawei Technologies Co. Ltd.  to install mobile phone lines.

Mobile Workstyle: The end on 9 to 5 job [Infographic]