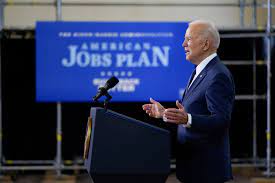 The $2 trillion jobs plan is a “one-time investment in a generation” that can create millions of jobs by improving the country’s infrastructure, as dubbed by President Joe Biden. The plan still concerns the auto industry even though it comes earmarked with billions.

A $174 billion grant for electric vehicles including tax incentives for electric cars, hundreds of thousands of charging stations, and all-electric government fleets comes as a part of this sweeping proposal.

The president of the United Auto Workers Union Rory Gamble, released a statement on Wednesday saying, “Workers will suffer disproportionately if we do not make the transition to a green economy in the right way.” His statement further read that there is a need to ensure a reliable and stable transition that doesn’t rely on a ‘one-size fits for all’ solution.

The stakes lie in the basic fact that despite higher costs, EVs or electrical vehicles require less labor as they are easier to build. Mark Wakefield, AlixPartners’ automotive practice manager stated that it is just physics when the parts to be put together are fewer.

Sam Abuelsamid, a senior automotive analyst at Guidehouse Insight, says it is a cleanroom process as the only humans involved are the ones maintaining the machines. He also says that assembling the battery packs is quite simple as “all done by automation.”

Cars will spend less time at service centers and repairs as the moving parts are fewer. It is not just the plant where people will lose their jobs.

Experts suggest that there are opportunities to create new jobs. Abuelsamid says, “While direct manufacturing jobs are likely to decrease, there will be new jobs in everything from installing and maintaining EV charges to the equipment need for battery production.”

The U.S. currently can produce 40 gigawatt-hours of batteries annually. It would need 1.1 terawatts of batteries each year and dozens of factories apart from the Tesla Gigafactory in Reno if all vehicles were electrical. The GM factory in Ohio can alone create over a thousand new jobs.

Factories will also need new workers to mine and refine the raw materials needed for EVs like lithium. There is also a need to expand the power supply whether from conventional or renewable plants, for charging the batteries.

According to Wakefield, the shift to EVs will result in “net-negative” jobs, in terms of traditional automotive manufacturing services. The long-term job count could still decline as many of the infrastructure jobs will be temporary. But it would be a mistake to stop this EV train in the U.S., says Wakefield.

Elon Musk to Join the Board of Endeavour Group