According to the press release of LAPD on Thursday, three suspects are charged for attempted murder and robbery, whereas the other two are charged for being accessories in the crime. 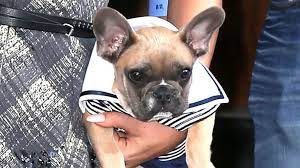 According to the press release of LAPD on Thursday, three suspects are charged for attempted murder and robbery, whereas the other two are charged for being accessories in the crime. Jennifer McBride, a 50-year-old alleged accessory of the crime, returned Lady Gaga’s dogs to the LAPD’s Olympic community police station after two days of the armed robbery. But the LA Police Captain Jonathan Tippet said that the woman who has returned the dog in February is “uninvolved and unassociated” to the crime.

However, according to the latest press release, now the detective believes that Jennifer McBride was in a relationship with Harold White, who is the father of one of the suspected murderers and also a member of a documented LA gang. Both the suspects and McBride are now charged as being accessories to the attempted murder.

According to the press release of the Los Angeles County District Attorney’s Office, Harold White has been charged previously for firearms possession and that Jennifer McBride has one crime of stolen property in her name.

The alleged suspects involved in the shooting and robbery of the singer’s dog walker are 27-year-old Lafayette Whaley, 19-year old Jaylin White, and 18-year-old James Jackson. According to the District Attorney’s office, all three suspects are members of the Los Angeles gang and have been charged with attempting murder, conspiracy to commit robbery, and attempting a second-degree robbery.

The press release from the District Attorney’s office also dictates that James Jackson is also booked for a semiautomatic firearm assault and for carrying a hidden firearm in a vehicle. James White has also been charged for one assault forced by the other suspects to cause great bodily injury. However, all five suspects are pleading not guilty and are out on bail of $1 million each.

According to the press release, the detectives believe that the motivation of suspects from this attempted murder and robbery was not to kill the dog walker, Ryan Fischer, but to steal the dogs that belong to a high-priced breed.

This incident took place on February 24. Ryan Fischer was out in the street with three dogs when a man approached him and shot him a single bullet, according to the Drake Madison, LAPD officer.

LA Police Capt. Jonathan Tippet said that the suspects came in a four doors sedan and two men tried to steal the dogs. They were successful in taking away two dogs, Koji and Gustav, whereas the third one was left behind.

On the bright side of the news, Ryan Fischer, the dog walker and to whom Lady Gaga called a ‘hero’ on social media after the incident, is admitted to the hospital and he is expected to make full recovery.

Johnny Crawford, co-star of ‘The Rifleman’ dies at 75