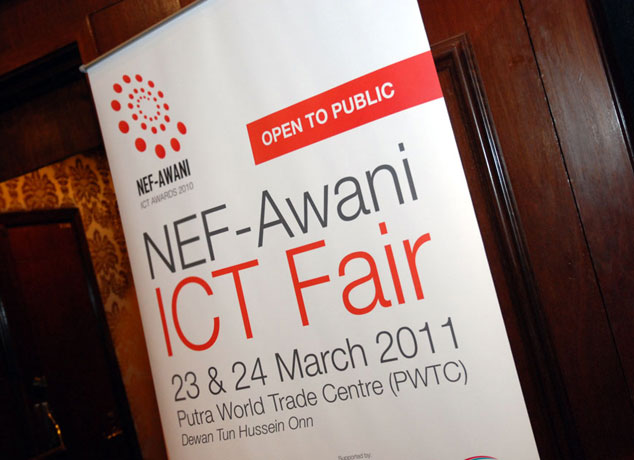 NEF-Awani ICT Awards is back and was recently launched on 31st October 2011 at InterContinental Kuala Lumpur, organized by Astro Awani television channel and Malaysian Association of Bumiputera ICT Industry and Entrepreneurs (NEF), and launched.

This year, the Awards have opened more categories which are:

And for the People’s Choice Award, the categories opened are:

The nomination period for the ICT Awards and People’s Choice Awards will be opened starting from 31st October 2011 and will end on the 30th November 2011. Over 200 entrepreneurs and firms from the ICT industry are expected to participate, as according to NEF president, Ashran Ghazi who added that the changes made in the format of awards and new categories introduced will attract more participants this year from about 100 last year.

The ‘People’s Choice’ award would now be opened to international brands and companies as well as international voters. According to Astro Awani’s general manager, Rozina Aziz, the selection of the nominees would be based on the impact they had on people.

Winners of the previous year have also attended the launch ceremony, including Norshafida Abdul Khalid from OREA Technologies, the winner of the Most Innovative Company and Nizam Razak, the co-founder of the Animonsta Studios, the winner of the Best Start-Up Company. According to the winners, the Awards have great exposure and recognition on TVs and media and are a great platform for companies to gain recognition and exposure from the industry for their hard work.

If you think you have the traits to be one of the winners, list yourself as a nominee by registering here.